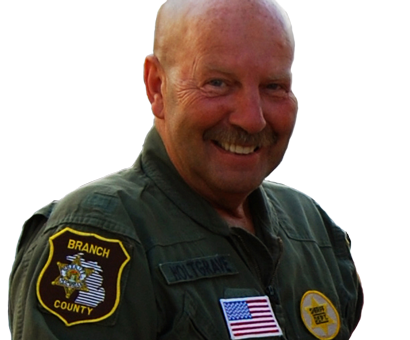 “It’s not as hard as I thought it was going to be. It’s still difficult, but it’s all about having the knowledge and doing it right.”

"Without training, it's not how they're going to crash - it's WHEN."

As a reserve deputy on the sheriff's dive team at the Coldwater Fire Department in Coldwater, Michigan, Rick Holtgrave knows a thing or two about water rescues. With a passion for and deep knowledge of diving, Holtgrave contributes his expertise and skills to the department's rescue missions and, even prior to his training at HTC, was confident that hovercraft were the best rescue vehicle for his team's dangerous missions on icy Lake Michigan.

"The hovercraft is mainly for the Michigan (lake) ice, as it's not always the greatest. But it doesn't stop the ice fishers and they still go out. Well, the dive team can't get to them, not safely, so I'm sure I can make [hovercraft rescue] work for them, I'm sure I can."

In fact, not only are hovercraft the vehicle of best fit for Rick and his rescue team, he is confident that there really are no reliable alternatives.

"We're just screwed if we have to go out on a bad ice. There is no other equipment. Otherwise, we'd just be pushing boats and ropes and hoping for the best."

And what prompted Holtgrave to sign up for the training program at Hovercraft Training Centers?

"I want to learn how to take care of [the hovercraft] right, and the way to do that is to get trained by someone who knows."

"Without training, it's not how they're going to crash - it's WHEN."

To many onlookers, piloting a hovercraft seems simple, something anyone can pick up immediately. What could be so difficult, right? In actuality, however, flying a light hovercraft takes considerable training, focus and education in order to properly and successfully operate the craft.

For Rick Holtgrave, the training he received during his time at HTC's headquarters in Terre Haute, Indiana was non-negotiable.

"Training really is very important," he stressed, and when asked whether or not he'd have been able to figure out how to fly on his own, Holtgrave had no problem admitting the truth: "I am not going to lie: NO!" he laughed.

With hovercraft, what may look like a simple, easily handled joyride is, in fact, a much more difficult learned skill than many realize. At HTC, we break down those preconceived notions, letting each of our trainees fully experience the unusual nature of piloting a hovercraft. For those without any previous knowledge of the technology, flying a hovercraft is a clear departure from more familiar modes of transportation.

"[Without previous knowledge of the technology], it's just an accident waiting to happen. Driving a car on the ice would be a good explanation," Holtgrave says. "It's not how they're going to crash, it's WHEN."

While many trainees' preconceived notions about hovercraft piloting are quickly dashed upon beginning their course, a session with HTC often comes with its share of surprises as well. For Holtgrave, his training proved that hovercraft flight is not impossible or out of reach. What may sound intimidating at first, in practice, is actually an exhilarating, rewarding and fun experience for those who invest the time and effort to learn.

"It's not as hard as I thought it was going to be. It's still difficult, but it's all about having the knowledge and doing it right," Holtgrave explains. "Am I an expert? No. But I understand what I need to practice. I'm not afraid to go out and try it now."